The former “boys club” vibe of the original series is gone with the addition of Perdita Weeks in the re-written Higgins role. “Is she snooty? Well she’s British”, said Weeks at CBS’ Television Critic Association preview day panels this weekend. 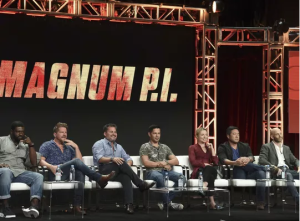 The producers stated during the panel that they knew they needed a strong female lead in the mix, and since Magnum and Higgins already have contrasting personalities, that would be the best role to remix.

They’ve lost the mustache, but are going to add tidbits of Hernandez’ Latino culture in to this new Magnum P.I., according to the Executive Producers. While they admitted there are no Latinx writers in their writers’ room, they seemed confident in their abilities to include it in the script.

One thing that is not changing whatsoever… expensive fast cars and big explosions. Both Jay Hernandez and Perdita Weeks had fun driving the Ferrari’s on set, which retail for at least $250k each even when purchased used. The EPs revealed the cars were the most expensive element of the pilot.