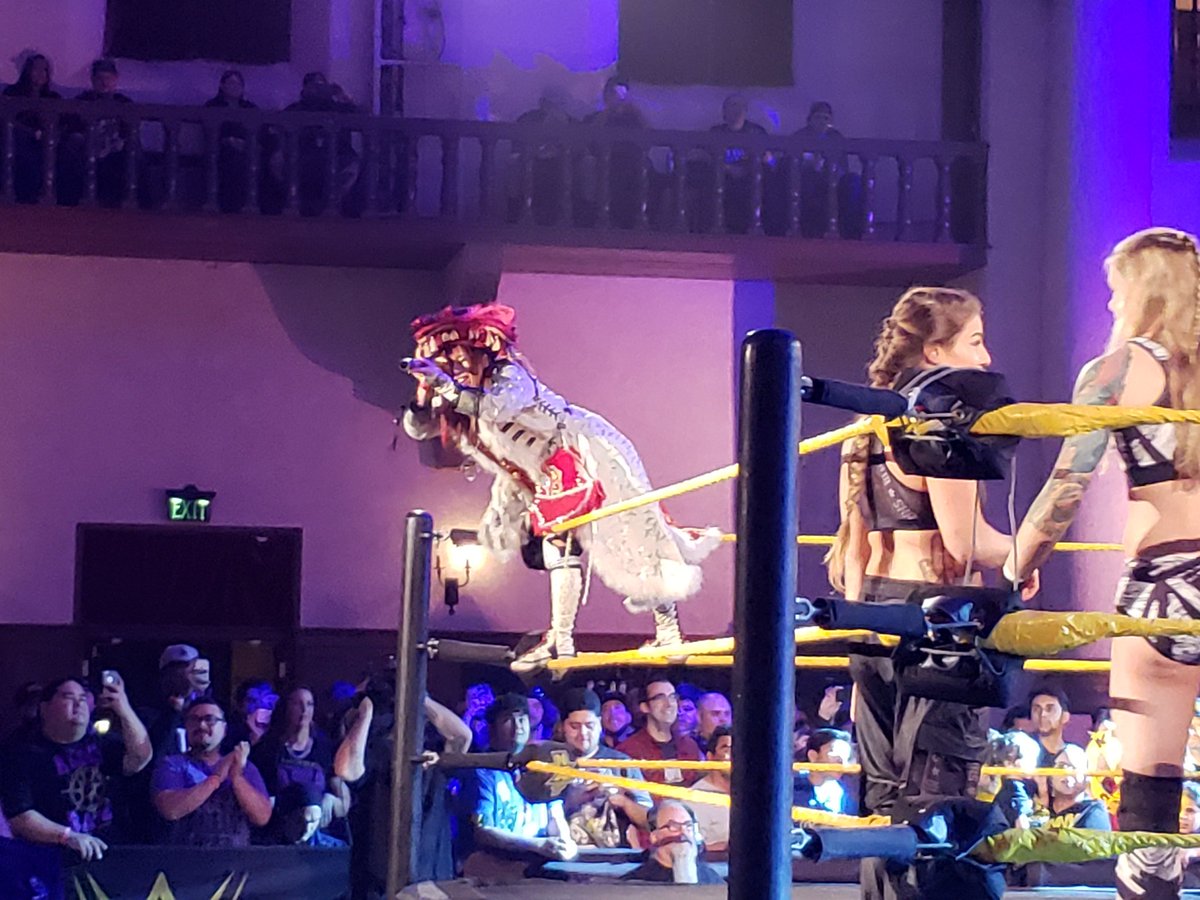 WWE NXT continued their Southern California tour Saturday night at the Riverside Municipal Auditorium; a night before their NXT TAKEOVER: PHOENIX event. The event was sold-out, had a hot crowd throughout the entire night and a very solid card.

The first person we saw step out was NXT Champion Tommaso Ciampa. He came out and cut a promo about being the best entertainer in the world and mentioned that he only performed large crowds and big events and therefore would not be wrestling that night.

Johnny Gargano def. Tyler Bate by Submission – This was a great opener, the crowd was really pumped for both guys. Half of the crowd cheered for Johnny while the other half rooted for Tyler Bate. Tyler Bate really shined in this match and came across very impressive. There were a couple near falls, but Gargano eventually took the win.

6 Women Tag-Team Match: Candice Larae & Io Sharai & Kairi Sane def. Shayna Baszler & Jessamyn Duke & Marina Shafir- This was another good match, it was fast paced and each girl got her moment in. The crowd popped huge for both Io and Kairi. In the end, Bianca Belair’s music hit and caused a distraction, allowing for Candice to get the pin. After the match, Kairi stayed a few extra minutes to sign autographs and take pictures with the fans.

Dominik Dijakovic. def. Kona Reeves – This was probably the least impressive match of the night. Kona got the heel heat fast from the crowd with his cockiness but it took a while for the crowd to really get behind Dominik. Dominik did stand out during this match because of his size and impactful maneuvers.

6 Man Tag- Team Match: War Raiders & Ricochet def. Undisputed Era– This was probably the most entertaining match of the night. It was a high impact match and the crowd loved Ricochet and kept their eyes on every single thing he did. Another standout was Hanson, he blew the crowd away after showing his agile abilities, a huge contrast to his size. Overall, this was a a very fun match and appealed to every person in the audience.

Matt Riddle def. Kassius Ohno – This match was not as good as some of the others on the card but both guys had the crowd in the palm of their hands. Kassius first came out and cut a lengthy promo on his relationship with the SoCal audience. He said people used to look at him with love and admiration and now they just look at him with pity. He then went on to say that’s how he sees his opponent Matt Riddle. The match was simple, the crowd loved Matt Riddle.

Tag Team Match: Street Profits def. Steve Cutler & Wesley Blake {The Forgotten Sons} – This was a fun and entertaining tag team match. The Street Profits brought a lot of energy and has some impressive spots during the match.

Main Event: Velveteen Dream def. Adam Cole – Both of these guys are NXT favorites, so right off the bat the crowd was stoked for this match. Velveteen Dream got the loudest pop of the night, the audience absolutely loved him. This was a good match, also not the best on the card but it got the job done.

Overall, NXT Riverside was a very good show and a fun night. Don’t miss NXT TAKEOVER: PHOENIX ON JANUARY 27, 2019 ON THE WWE NETWORK.