Egyptian-born AMEN RA takes his passion for Egyptian Mythology and creates a world of dreams and fantasy in his Art, Music, and Acting. AMEN RA, a Refugee, has taken the world stage at a young age. At age 9, he organized a UN Campaign for children in war zones with a concert that was hosted by Guest Oscar Actress, Vanessa Redgrave. AMEN RA drawing on his personal experience and creative fire he is a warrior for those who have been oppressed. 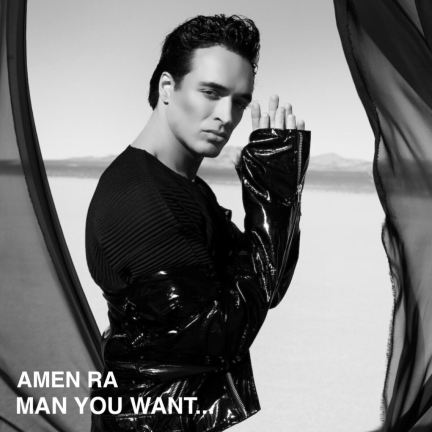 I love its mysticism, the idea of Mythological Gods that we all can become when we pursue something greater than material success. You know… from slave to Mythological God that always was a light, a story I saw, when growing up in hard circumstances.

I am so happy to invite you to my website, with my Debut EP – RISE UP CHAMPIONS. Please visit http://www.amenra.com. Soon I will premiere my Debut Album.

I am a Singer and Actor. It always was about telling a great story for me. I wanted to be a great storyteller to give people an epic journey, and a beautiful adventure. My shows are not typical concerts. I like to make spectacles, with a storyline like in opera or film with action and excitement. To me everything is art. From what I sing to explosions on stage! I call my performance art – POP MYTHOLOGY. I envision something like “Homer of Today.” That is my Artistic Dream:)

I prepare large touring shows, which will be more of a video game with Greek Tragedy, live on stage. All details are like a movie set. I just completed my robotic armor, that will be the largest stage outfit ever done for a Pop Concert. It took lots of time to learn the new way of dance in it:) It reminds me of TRANSFORMERS. I want kids and all audiences to feel like they are on a roller coaster. We need that type of – “Escape.” Same with Acting. I like extreme characters that are difficult, deep, and tragic. Like the characters in Greek or Shakespeare Theatre. Characters that will change and influence you forever, with their passion and message.

I was born in Poland, due to work of my Parents. It was very hard, I was “Different”, and hated for that in schools and in everyday life. Being passionately Artistic, International; and at the same time being Muslim, Jewish and Christian was not acceptable. I was outcast by others, and it felt so lonely to not be welcomed, respected or recognized… I felt like the character of my favorite Film – EDWARD SCISSORHANDS… until I started to perform. As an Entertainer I felt loved, and that was the only thing in the world that made and makes me happy – to perform for love, to love and be loved.

I started to perform when I was 5. My beginnings were in local theatre, then I was performing in International Theatre Festivals. I even ended up performing for US audiences as a small kid:) I felt I had wings and I did, I surely did. Art made the impossible the possible. And when I saw its magical power, I started to use the platform of my stage to help others for those forgotten, unhappy, who have no hope; like me before…So I became the Ambassador to Queen Elizabeth’s Foundation for Animals – RSPCA, UNICEF, and UN. I changed the Law for Horses from so-called “Death Transports” in Poland, and I was the youngest to organize a UN Campaign. It was for children in war zones, with an Arena Concert which I was hosting with Guest Oscar Actress – Vanessa Redgrave, I was 9.

The more I was able to do, and the more humanitarian triumphs I had, the Polish Government started to watch me… And stopped me. In their eyes I was a “Danger”, they were saying: “How can a child be a national hero? He is too popular on every level.” I never wanted political power as an Artist, but somehow it happened. I was as a kid in school books and on TV’s main Political News… So the First Lady, who was the biggest Public Figure, and the Presidential Palace started an embargo on me. Long story short, I was almost killed and I became a Political Refugee. I never went back to Poland. I left quietly and came to my dream and – America.

I am developing a film based on the masterpiece biography of Freddie Mercury, written by very Dear Friend – Lesley-Ann Jones. We both hope to bring to life a movie idea we have – MERCURY: MONSTROUS ANGELIC. I’ve done preparations for my character, in make-up designed by OSCAR Winning, Joel Harlow. I feel the pain and joy of Freddie. I somehow created a “Friendship” with my Character. He was this “Rock God”, who at his peak faced most terrifying illness known to man kind…

To me it’s a reason why I perform. I want to shine the light of entertainment in the darkest places in the world. Go where nobody goes, visit people who feel like I felt – forgotten and alone. “Make Believe,” and make a better reality.

I focus now very much on Refugees in the Middle East, especially in Syria. I know what they go through, I was “There”, where everything was against me politically. Hate is a terrible thing. It can destroy everything. We must stand up and not allow it, only as a group we have the power to fight, we must be united.

Making POP MYTHOLOGY, a today’s “Homer Art Form” in Pop Music has inspired me. Something of very epic scale, and touching today’s subjects, problems, and triumphs. GODS is 10 Years in the making:):)! I came up with the idea when I was a kid, as I started to sing with opera material. There was a singer – a Goddess of most magical voice. I can’t yet tell who the singer was but she will be on my record.

In the beginning, nobody understood this concept, how I wanted to mix Opera with Pop/ Techno/ Hip Hop. And then I was a slave to the Refugee status. I was fighting for a home, to be free and to create. When I got my first VISA to stay in the US, I got into a very abusive Artist Contract, my Bosses were my “Owners” and didn’t like my artistic ideas, and like me as me. They told me to hide my Arabic Heritage, change my hair to blonde, and wrote truly a script for all I did. So, I had to wait with GODS, until I got out from that contract.

To get out of contracts was hard, as it was a legal way of “Human Trafficking”, what finally we can talk about thanks to brave Icons like – Rose McGowan. In my case, it was my Refugee status that allowed some low-class Entertainment Companies use that, and in exchange for help to get the ability to live legally in the USA, they did demand me to be their “Artist Slave.” Once you get your Artistic Freedom, and you shop your ideas, you meet many wrong people.

Hollywood is the most beautiful place in the world, but its light attracts also those who come here for wrong reasons. I would pitch my TV Show, my Pop Super Hero, my Music Show, my ideas – and often I would get a meeting with a VIP then I never heard back. I would then see my idea on a big Billboard, or on Broadcast Concert, with a known Star of that particular Production Company. It is very depressing. But I am very blessed that I survived that, and I wrote many versions of this song – GODS, and after all my life, did write it by itself. It is a song about a boy and a girl who are the slaves, but in the mirage of their love they become the Mythological Gods, they rise above any obstacles.

The Album will be a Post-Modern Pop Opera, truly. Each song will carry its own story, and all of them together will make a full-package. When I was writing the Album, it was all in “Acts”, with each song having a whole show on set and stage.

I dream to go to Syria, with needed Aid, and to really be with the people. To play with kids, visit hospitals, and – PERFORM there. You see, most of the people get shipped help, but their biggest need is Love, Recognition, and Connection with us. We must “see” them. They are exactly like us but in a Horror of Reality.

Music can break all borders. It can make everyone so connected, it’s like the purest love affair:)!