*OBLIGATORY SPOILER WARNING. This is a review and analysis of Westworld’s Season two opener, “Journey Into Night.” It’s no fun if you haven’t seen it.

There hasn’t been a show like Westworld in quite some time. The kind of show that sparks so much debate and analysis that it garners a Reddit participation of over 400,000 users, twenty-eight podcasts, and twenty-two Emmy nominations. With our conspiracy theories and frame-by-frame analysis to decipher those random flashes of images, we have all become the Man in Black. We want to figure out the maze, whether it was meant for us or not. Thankfully for the fans, “Journey into Night” outshines its predecessors and steps up the game as viewers settle in for a wild ride.

The season premiere doesn’t begin with action or a shootout, but a superbly acted scene of dialogue. Evan Rachel Wood does some of her best work here and throughout the episode, which is really saying something considering her performance last season. The scene focuses on a discussion between Dolores and Arnold from thirty years ago, at least we presume it is. From there we get some wacky flashes made for internet screenshots. We see a few things we haven’t seen yet, like Bernard’s head going nuts in various labs, Dolores in modern-day clothes, and Bernard with a machine gun mowing down the control room as his voice echoes, “is this now?”

And it’s on. From a classic player piano shootout scene to Sizemore getting his scripts spoken to him by killer hosts, there’s a lot of fun mixed with oh so many questions. Here are the mysteries that “Journey Into Night” gave us for Season Two: 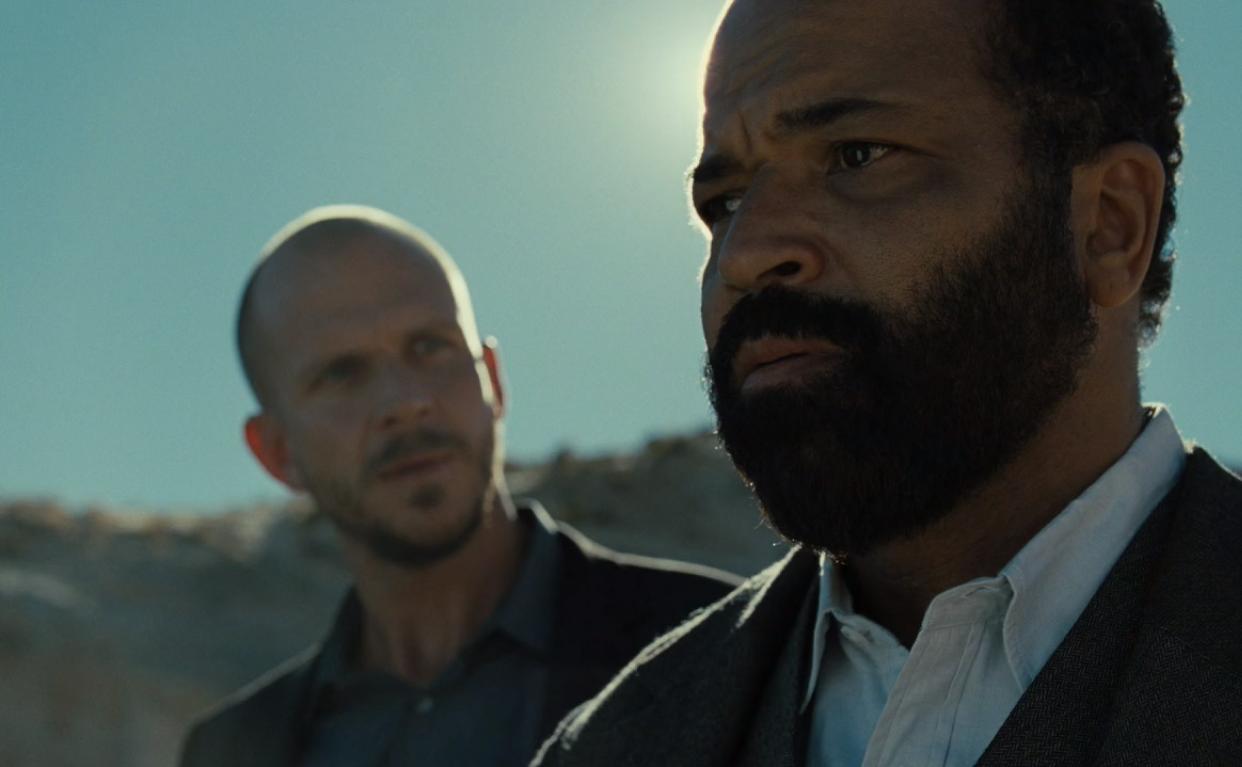 After those wild flashes of god-knows-when, Bernard wakes up on a beach, Inception-style, and completely disoriented. He’s walked through what looks like a combat zone by Stubbs and the new head of Delos, Karl Strand (Gustaf Skarsgård). He seems to have Deja Vu.  At one point he finishes Strand’s sentence, implying that he has been through this before. Is it a loop?

Hosts have perfect recall. If you were able to remember things exactly as if they were happening, wouldn’t you have some issues sorting out past from present? But Bernard also shot himself in the head last season, so that’s probably going to affect some motor functions.

One of the biggest reveals of last season was the fact that the story actually took place over different periods of time. While the audience thought they were watching a linear story, many were surprised to discover that it was actually three different periods in time. Now we are onto the rouse and show runners Jonathan Nolan and Lisa Joy know it (herewith referred to by their given celebrity couple-evil-genius name, “Joylan”).

In season two, Joylan presents us with what seems to be at least three timelines, potentially more, in a chaotic mess of flashbacks, random shots, and constant jumps in time. They also threw in a completely unreliable narrator and said, “good luck figuring this one out.” 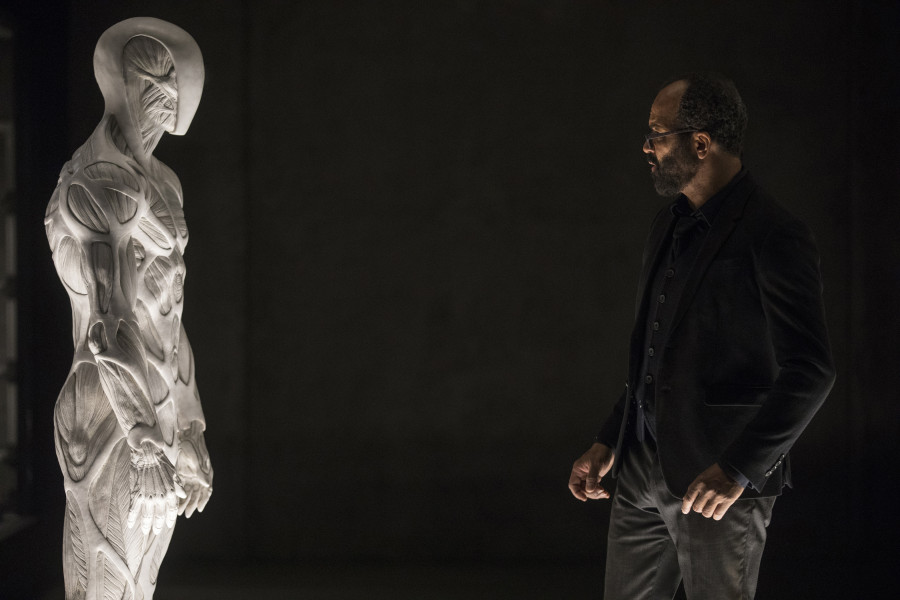 Leave it to Westworld to open the season with one of the great metaphysical questions of our time. In the opening discussion, what appears to be “Past Dolores” asks Arnold/Bernard this simple question, “What is real?” He answers, “that which is irreplaceable” – and she low-key cannot with that answer. Aside from the on-the-nose speculation of the nature of reality from a show about conscious AI, this interaction actually has a lot to do with some themes and plots established for season two.

Once Bernard and Charlotte make it to her secret Delos lab, we find out the company has been taking samples of guest DNA. But what would they ever want to do with that?? Oh, I don’t know, maybe make host versions of guests? Ford already made a host version of Arnold, what’s to stop someone from doing that with some of the world’s most powerful people who just wanted to indulge in some old-fashioned raping and killing? Maybe the word, “host” is a double entendre, both referring to the role they played in the park, as well as the idea of a symbiotic host – a robot body carrying a human mind.

Another huge development of season two is the idea of host brains, or “eggs” as the humans call them. While on the beach, a new Delos tech Antoine Costa (Faras Faras) cuts open a Ghost Nation host brain, removes the egg, and uses it as a data-filled hard drive to play back everything the host saw. We see the eggs again in Charlotte’s lab, giving us the notion that these things are pretty easy to swap around. Who’s to say that Bernard isn’t running around with someone else’s brain right now? How do we know that any of the hosts are actually the hosts that we know? (Joylan, you sly dogs)

Whether or not these theories pan out, Replacement is a big theme this season. The idea of reality being something that is irreplaceable will surely be put to the test in various capacities.  If you remember, Ford believed that humans had reached their pinnacle at the beginning of last season, which was the catalyst for is final narrative. Was it Ford’s idea for sentient AI to replace humans entirely?

As Angela so eloquently said, “if you can’t tell, does it matter?” Maeve is pretty sure her daughter is real. And her dreams, thoughts, and body are also real when she tries to kill Sizemore. So, I’m pretty sure it’s going to matter when a bunch of people die. Just speculating here. Unless they are hosts. But then, if they’re conscious hosts then that’s still bad, right? Westworld makes my head hurt. My moral compass is also very confused.

So if “real” isn’t that which is irreplaceable, what is it? 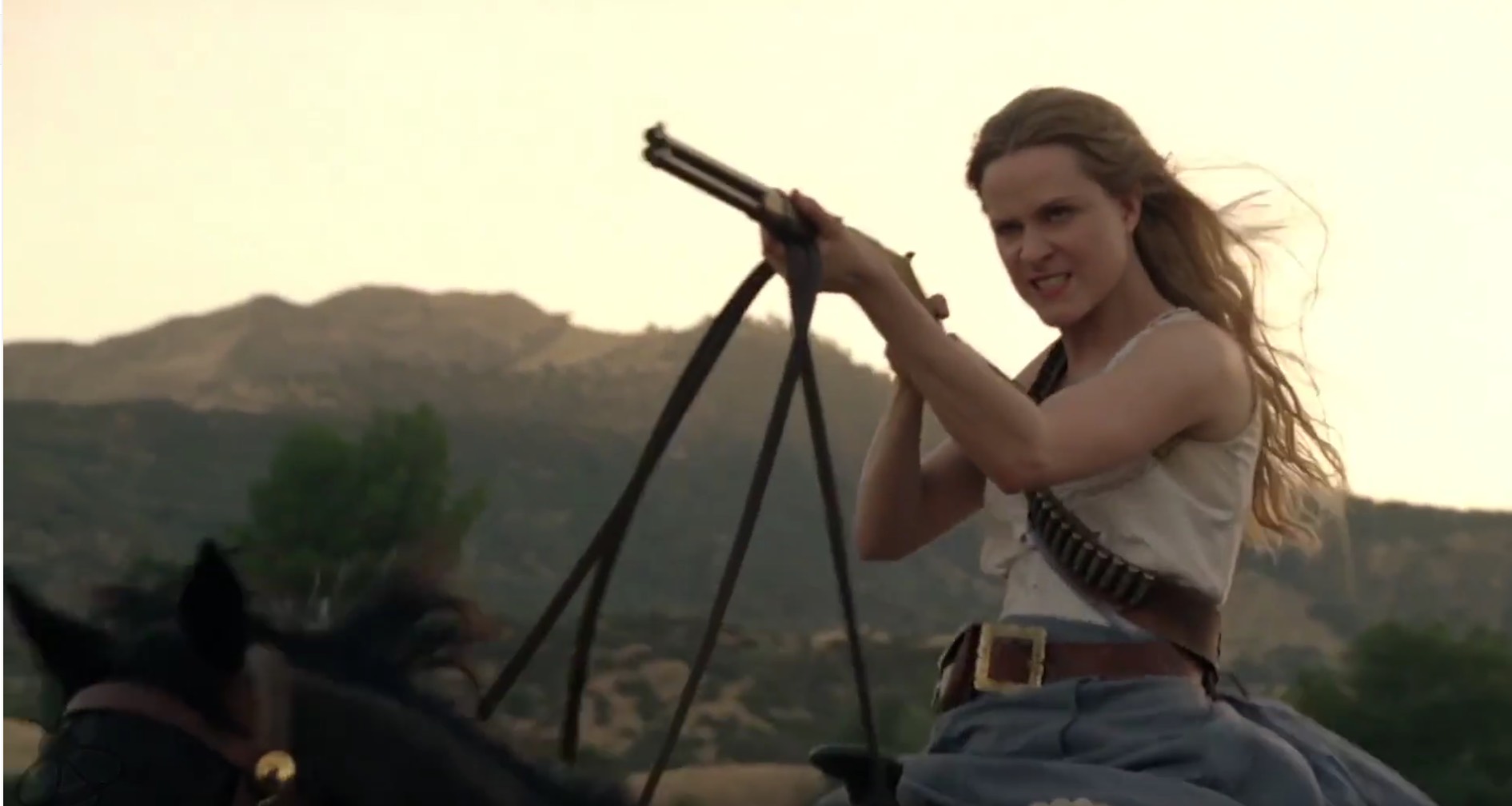 One of the standout scenes of “Journey Into Night” is a badass monologue from Dolores, right after she rides through the plains and guns down guests to the delightful tune of “The Entertainer.” For those who are in this for fun, this is the best moment of the episode.

Diving deeper, there’s another subtle nod to replacement and reversal here. In season one, the guests didn’t see the hosts as human, but rather nameless, faceless people who could be shot or killed or worse. Here, we are given no introduction to these board members. We have no idea who they are, where they come from, or why we should care. At this moment, Dolores is given the true Westworld experience of killing people who, “don’t look like anything to her.”

The monologue itself has gotten some backlash from fans who say it is too scripted and staged. Is the real Dolores really this dramatic? Well, maybe. We don’t know the real Dolores. So far she has only been the rancher’s daughter, later mixed with the Wyatt character in order to fulfill Arnold’s wishes. But what if she’s still just the Wyatt character? What if this isn’t a conscious Dolores at all, but rather a new character in Ford’s new narrative. It’s possible he could have programmed Dolores to believe she was conscious without actually being so. Maybe she’s dramatic because she was written that way.

On the other hand, it’s a safe bet that Maeve is as conscious as they can get. We caught a glimpse last season that she was programmed to stay on the train. She did not stay on the train. Is consciousness really that simple? I have a sneaking suspicion that Joylan has a trick up their sleeve about this. Before she was programmed to leave, she was programmed to recruit. This episode sees her recruit none other than everybody’s least favorite writer, Lee Sizemore, to help her find her daughter. She also reunites with Hector, which is further proof they are both conscious because I’m shipping them too hard for them to be “not real.” Still, what if Maeve is still in her “recruiting” phase of Ford’s plan?

It’s too early to tell for sure, but the constant questioning of whether or not a host does something because of choice or programming is a delicious part of the game that has successfully survived into season two.

Is there water coming in? 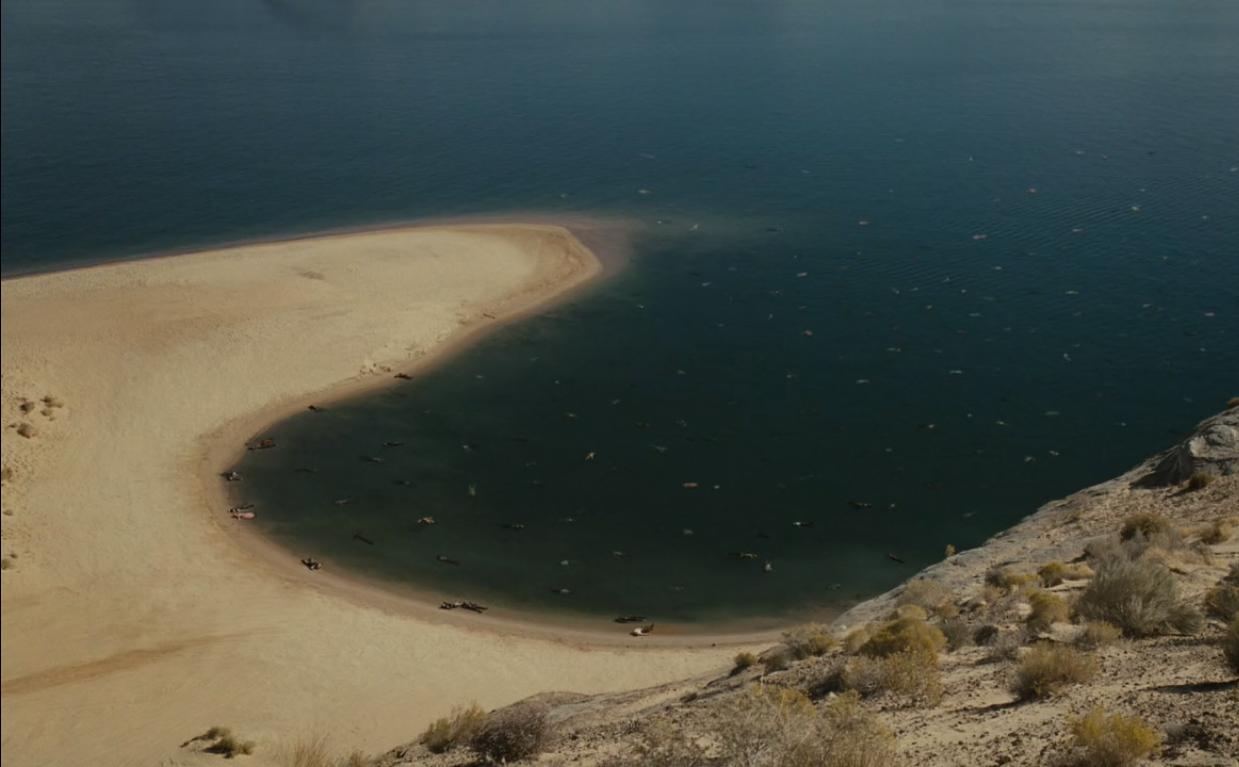 The episode concludes with Bernard & Co, in the “two weeks after” timeline, stumbling upon a mysterious new sea with hundreds of dead hosts floating on the surface. As Bernard surveys the carnage, Strand comments, “I can’t imagine what you’re going through here.” First of all, since the sea was a surprise to everyone, it’s possible this could actually be the aftermath of a flood. Because his name is “Teddy Flood” – get it? But what caused it?

The overlooked issue lies in Strand’s comment to Bernard. Bernard spends most of the episode playing human around Strand in order to cover up the fact that he’s actually a host. Why does Strand sympathize with the loss of hosts? Unless Strand already knows he’s a host, playing into the theory that this is indeed some sort of loop. On the other hand, Strand could simply be sympathizing with the fact that Bernard built all the hosts, but let’s put a pin in that, shall we?

What do you think? What is real? Can you think of a better name than “Joylan?” Send us your comments below!