Warning: If you aren’t caught up on Westworld, ancient Greek myths, or the Bible, this post contains major spoilers for all of the above.

Ya’ll ready to get your mythology on? Westworld’s latest episode, “Reunion,” outshines the premiere in what is shaping up to be quite the second season. Diving deeper into characters, backstory, and a whole lot of mystery, the show comes into its own, proving the first season was indeed just set up for this kind of fun. The most notable aspects of the latest episode are not the reveals, the performances, or a game of “guess the robot,”  but the intriguing Greek and religious symbolism scattered throughout the episode like stars on the ground.

If you’re watching casually, this might not look like anything to you, and you’re probably very confused. If you’re a die-hard fan, it’s difficult to track all of the clues. So let’s round up all the hidden symbols, motifs, and themes of  Westworld’s “Reunion.”

If you’re watching casually, this might not look like anything to you, and you’re probably very confused. If you’re a die-hard fan, it’s difficult to track all of the clues. So let’s round up all the hidden symbols, motifs, and themes of  Westworld’s “Reunion.”

The episode opens with Arnold walking an almost-brand-new Dolores through his new home under construction. This is later revealed to be part of the initial pitch of Westworld to Logan Delos (more on that later). Arnold’s house is full of these little cross signs – almost exceedingly so. Honestly, who wants that much of one thing in their house?

Thanks, Westworld Subreddit. You guys are the real heroes here.

According to different theories, this could either be a greek symbol or a Jerusalem Cross or knowing Jolan, probably both.

The idea of underwater stones leads to Freud’s classic “Iceberg Theory” and could be a symbol of Arnold’s never-ending obsession with Host consciousness. It’s also interesting to note that the symbol is particular to water which is a running motif of Season two –  the flood, references to “parting the red sea,” Westworld’s island location, etc. 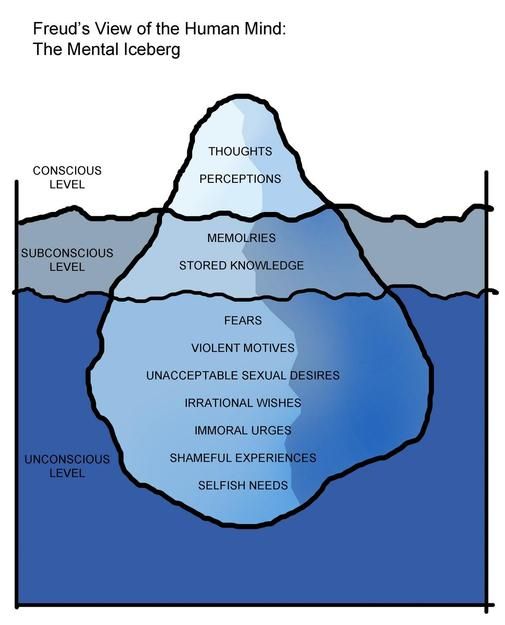 Many speculate that this could be a Jerusalem Cross, but a more interesting theory highlights these as Jerusalem Cubes, which is a pretty significant difference. Let’s push up our nerd glasses to discuss, shall we?

A Jerusalem Cube is a fractal object. If you’re like me, the only thing you remember about High School is that one time no one asked you to dance at homecoming. So here’s a geometry refresher: a fractal is a pattern found in nature, like a snowflake, that is “useful in describing random or chaotic phenomena.” Fractals are also neverending patterns, or loops if you will. Did you catch that?

For those of you following at home,  this symbol could either symbolize Host consciousness or a never-ending narrative loop. Either way, I think I need to get out more, and I might know why I wasn’t asked to homecoming now. 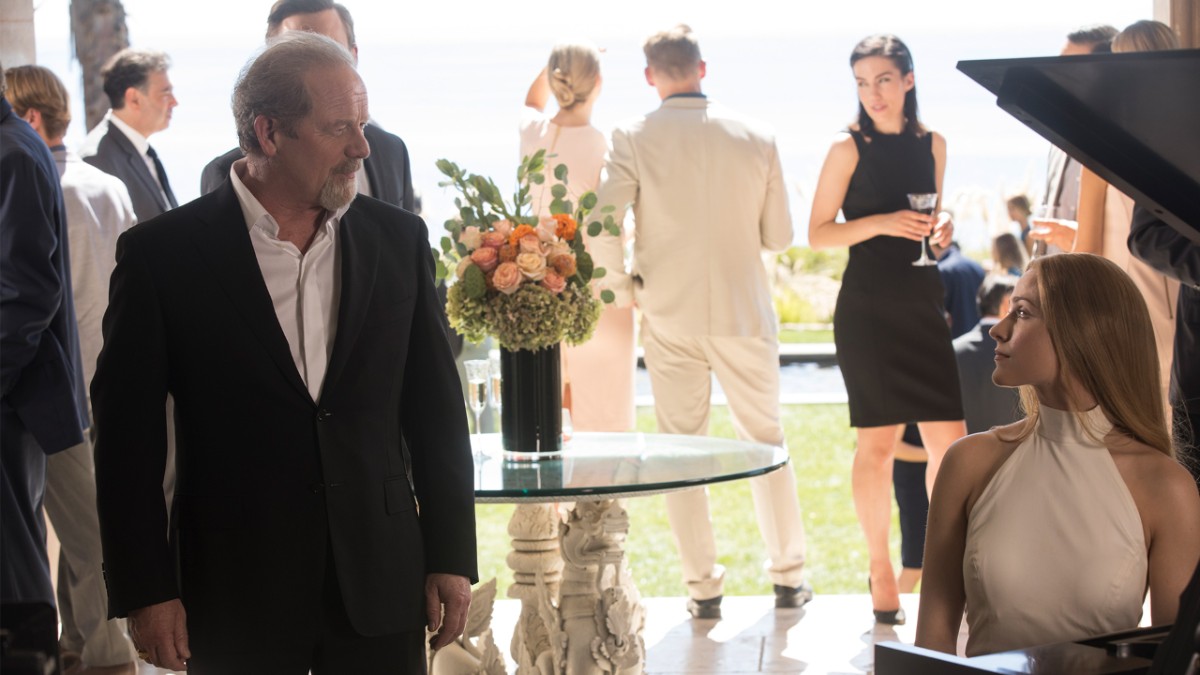 In this episode, we meet James Delos, Logan’s father and the head of the company. We also learn that Arnold and Ford’s original company was named, “Argos.” Both of those are Greek names but don’t have any other meaning besides that. Just kidding.

Delos is considered a sacred Island in Greek Mythology, the birthplace of Apollo and Artemis. We know Westworld is an island, so maybe this is a nod to the idea that Westworld (or any of the other Delos parks) are the birthplaces of gods. That goes along with some other biblical imagery  – more on that later.

What’s more interesting is the mention of Argos, and for that, we need to dive into some Greek Mythology 101 for those of you who weren’t around for “Westworld’s big fat Greek season one.”

Argos connotes the Argonauts, as in “Jason and the…” These guys played a role in the Trojan War which Joanna Robinson speculates could be a clue to look out for a Trojan Horse in Westworld. Is it Bernard on the beach? Is it the weapon that Dolores wants for the war? Is it Peter Abernathy and the data he carries? We can’t know. 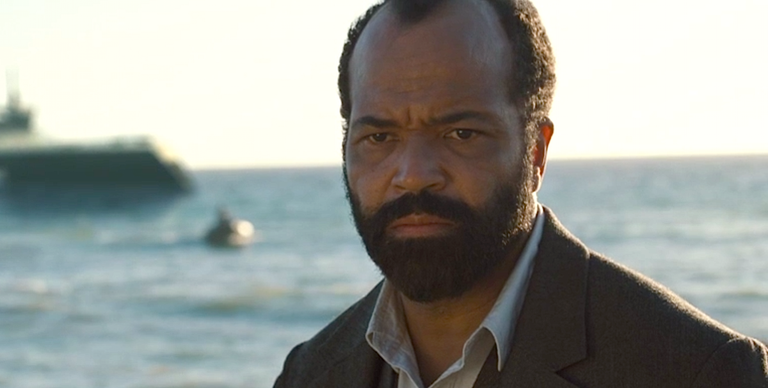 More importantly, Theseus was a member of the Argonauts. Let me break the story down for you, and yo let me know if anything sounds familiar:

King Minos was an ancient king of Crete who hired a craftsman to build an enormous maze with a flesh-eating Minotaur in the center. Every seven years, Minos required the people of Athens to pay tribute to him and his power by bringing food (aka people) for his hungry Minotaur. Theseus, the son of the king of Athens, finally caught on to this atrocity and said, “hold up.” He goes to Athens and volunteers as tribute to go through the Maze. (If this sounds like the Hunger Games, it is.)

Minos’ daughter, Ariadne, finds Theseus’ bravery very attractive and swears her undying love for him because if you’re a Greek demigod, it’s just that easy. Ariadne gives Theseus a long piece of thread to trace his way back from the Maze. He goes through, defeats the Minotaur, and gets out alive. The two lovebirds run away before Minas figures out that his precious Minotaur is dead.

But Theseus wasn’t as twitterpated with Ariadne as we thought. In the first-recorded account of Ghosting, Theseus abandons her on the island of Naxos. Upon arriving home, he’s so torn about the whole ordeal with Ariadne that he forgets to put on the white sails of his ship as a symbol to his father that he survived the Minotaur. When his father sees black sails, he assumes Theseus is dead, and immediately kills himself. Theseus arrives back in the harbor and mourns his father, leaving his ship at bay for over thirty years.

The parallels to the Theseus narrative are pretty clear, leading to intense speculation about who could symbolize who. It’s most possible that Dolores is our Theseus and poor Teddy is Ariadne, especially since he seems to have been abandoned and washed up in some sort of flood. What’s interesting about Delos and Argos, in particular, is the fact that the lore of those islands add the character of Aphrodite to the mix, stating that she was the one who succeeded  Ariadne, and also convinced Theseus to leave her on Naxos. This could be a subtle clue that one of the characters is also playing the Aphrodite role.

If you think I’m crazy, why is there an Aphrodite statue at the Major’s dinner table?? 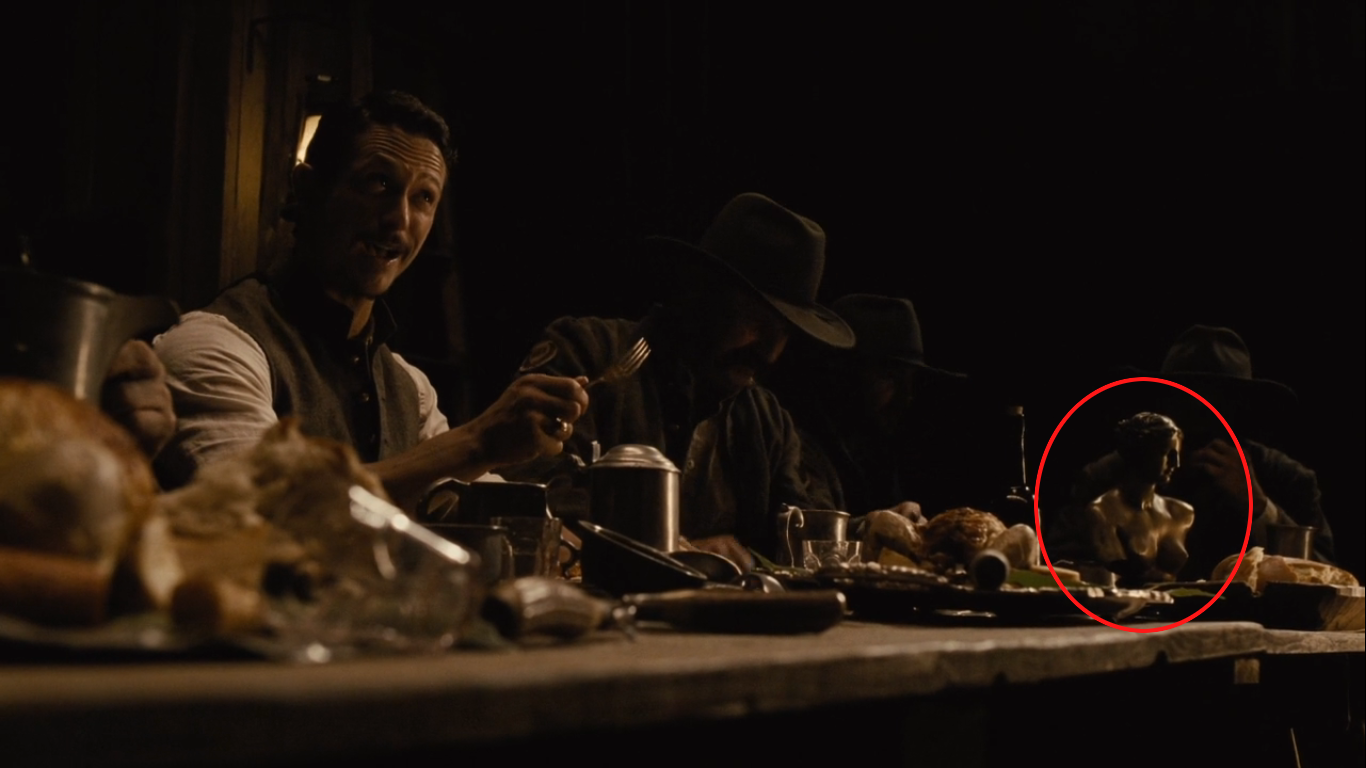 …thanks to the folks at Reddit for catching that one.

But wait! There’s more! Theseus’ ship required more and more repairs as it decayed in the water. They replaced so many parts that after a few decades there wasn’t a single original piece left on the ship. This story gave birth to the philosophical thought experiment appropriately titled, “The Theseus Paradox” which uses this illustration to pose the question: If an object has had all of its components replaced, does it remain fundamentally the same object? If the ship has all new parts, is it still the same ship? If not, at what point did it cease to be the old ship?

This episode gave us some critical insight into Delos’ plans for Westworld. Thirty years ago, James Delos was dying of some sort of vague coughing disease. He seems to be hoping that the technology of the park will allow him to “stave off his retirement” – perhaps from life in addition to the company. The references to Argos, Delos, and other Greek influences highlight the Theseus paradox in what could be our biggest clue that Delos plans to replace human bodies with robot clones…or they already have.

Bonus: Theseus is also known for “The Six Labors” – an adventure in which he had to where he encounters a string of six entrances to the underworld, each guarded by an enemy. We know there are six parks. I’m just throwing that out there.

Bonus: “Ship of Theseus” is also the title of a book written by JJ Abrams, executive producer of the show and the only man on earth who is truly living his best life.

The nature of freedom, and what it really means to be free, is a significant theme in this episode. Maeve and Dolores discuss what freedom looks like for each of them in two very different scenarios. At one point Maeve asks Teddy, “are you free?” Poor Teddy isn’t sure. With the concept of freedom comes the idea of a savior, or a person who will set their people free. The show immediately jumps to Biblical imagery to drive this point home.

This is the last supper…

What’s interesting about this scene is the fact that the Major is in the Jesus role, not Dolores. But we can all lose a lot more sleep with the revelation that Dolores doesn’t fancy herself a Messiah, but God himself, as she resurrects him from the dead.

The last supper also calls to mind the betrayal of Jesus and the role of Judas. Remember last season when Dolores was talking about the “Judas Steer?” Yeah, me neither. I had to look it up. Teddy was being all cute asking her how they got all the cows to go in the same direction. She replies, “That’s the Judas steer. Rest’ll follow wherever you make him go.” It’s called the Judas Steer because they are all led to the slaughter, surely unannounced to even the Judas Steer himself. Not only are we looking for our Messiah figure, we can’t forget about our search for which character is the “Judas Steer.”

It seems plausible the confrontation scene between Maeve and Dolores could pit one of them as a savior, one of them as a Judas. The other theory is that the Judas steer scenario could have already happened with Ford leading the board members to their slaughter. It could also be a much larger metaphor. Logan’s character regression in this episode hints at his fear that Westworld itself is the Judas steer.

“That, darling, is the sound of fools fiddling while the whole fucking species starts to burn. And the funniest fucking part? They lit the match.” – Logan Delos 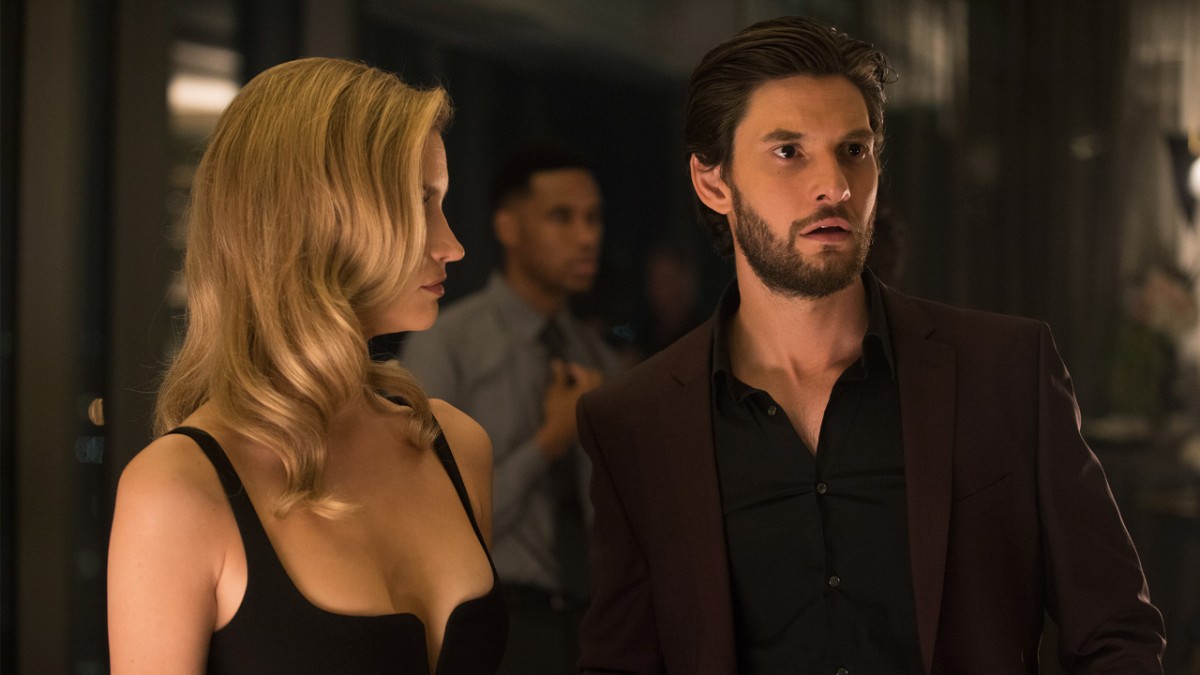 And then Angela is casually wearing a crown of thorns. For no reason. 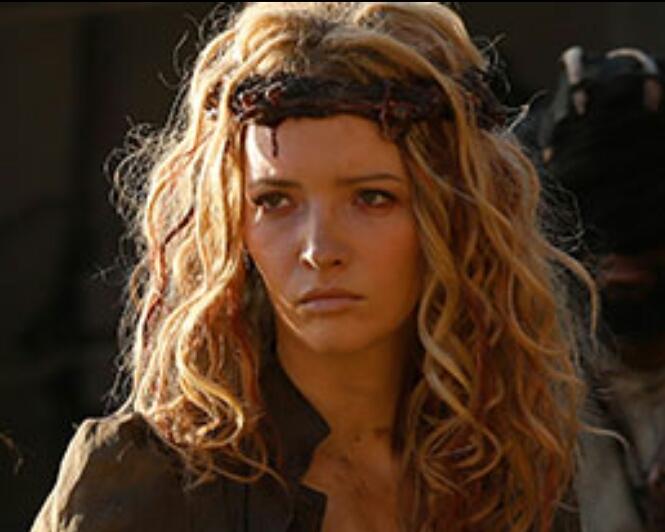 I’m pretty sure this is less of a religious symbol and more of a sign that we are all being royally toyed with by the writers. All is meaningless, and everything is chaos.