The film premiere for Fathom Event’s new pro wrestling documentary film, 350 Days, premiered last night in Los Angeles at the TCL Chinese Theatre. The film directed by Fulvio Cecere was a five-year-long project about what life on the road during pro wrestling’s territory days of the 1980s and earlier was like. The documentary featured dozens of pro wrestlers who openly discussed the struggle of being a wrestler during that time, the use of drugs and steroids, infidelity, crazy fan encounters and injuries. 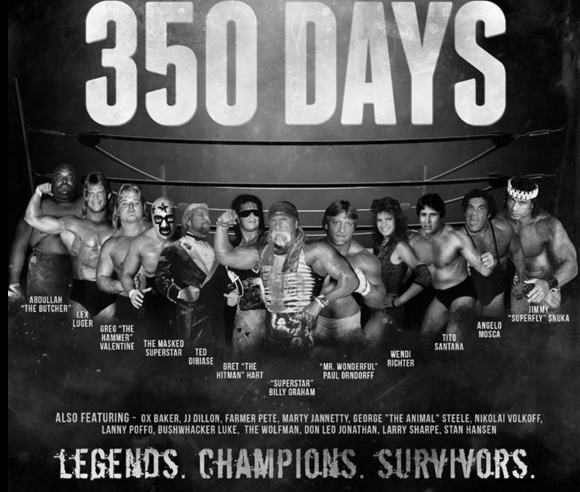 In the film, we were given a behind-the-scenes look through photographs and interviews by some of wrestling’s legendary wrestlers including  Bret ‘The Hitman’ Hart, “Superstar” Billy Graham, Greg “The Hammer” Valentine, Tito Santana, Paul “Mr. Wonderful” Orndorff, Abdullah The Butcher, Wendi Richter, Bill Eadier, Nikolai Volkoff, Stan Hansen, Angelo Mosca, Lex Lugar, Ted Dibiase, and even some of the last interviews ever done with George “The Animal” Steele,  Jimmy “Superfly” Snuka, Ox Baker, The Wolfman, Don Fargo, and Angelo Savoldi.

Overall, 350 Days, was a great story told by the many wrestlers mentioned above. It was very interesting to see them open up about some of the more difficult issues many in the limelight try to avoid discussing which were of course the use of drugs and sleeping with “ring rats.”

Ox Baker was one of the highlights of this documentary, his stories and character stayed true to who he was in the ring. And the most laugh-out-loud funny scenes was when he cooks in his kitchen and explains each thing he does and mixes it in with pro wrestling. It was comical and endearing to watch. Another cool scene was with Jimmy Snuka, he  walks through what seems to be a zoo, and he goes around and feeds the animals and plays with them. It was a nice touch to the story.

There were many other highlights of the film, but all in all I think 350 Days is a great documentary for wrestling fans across the world to learn and gain some insight of what the business was like back in the day.