AT&T* Hello Lab Originals and Fullscreen recently came together to create social programming geared towards a millennial and Get Z audience.  One of their new series is called Starter Pack starring Jasmine Luv, Lauren Giraldo, Dytto, and Anthony Padilla.  The show focuses on Ayana Martin played by Jasmine Luv; a recent college graduate who’s now looking to turn her college degree into a career.

The show is very fast paced, funny, quirky and relatable. The way the show is shot and produced makes it clear that it is for a newer digital audience. But within minutes into the show I was already interested and entertained. The show even subtly touches on political issues such as feminism and racism. But in a light fun way. My personal favorite part of the show as a college graduate was how hard it was for Ayana to land her first job, and all the wacky job interviews she had. The show touches on how even having a college a degree nowadays doesn’t actually guarantee someone a job.

And Instinct Culture had the wonderful opportunity of talking to Jasmine Luv.

Jasmine says that one of the first things that attracted to her to the series was the script, after reading it she immediacy related to her character, ” I loved the role.”

Jasmine had already made a name for herself through her Youtube videos, and notes that the biggest difference between creating her own content versus being on a show is that she doesn’t have to do the editing and all the work that goes into production portion of the videos.  Jasmine says she’s “used to taking over,” but now she kinda gets to sit back, do her lines and enjoy the process.

And because Youtube is such a hard place to break into. Jasmine gave us her best tips to becoming a successful content creator.

We also asked Jasmine about her favorite TV Shows, here’s what she picked:

Overall, it’s great to seeing a young woman who has worked so long on creating her own content get the opportunity to star in her own series. Jasmine hopes to one day go from TV to film and work with people like Angelina Jolie. 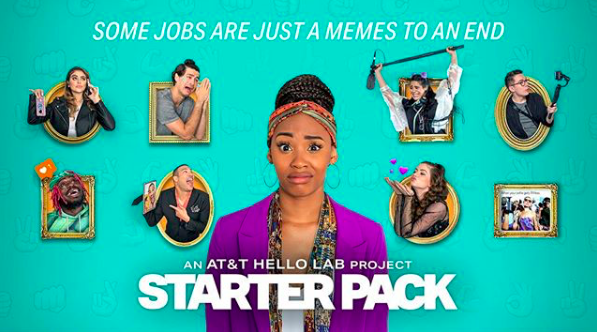 Ayana is left unprepared for adulthood after getting her master’s degree from a prestigious art school. On top of Ayana being broke, she and her meme-artist boyfriend Bryce just split up. Feeling pressure to prove herself, Ayana gets her dream job at a local museum and is determined to find “art” in the medium she previously deemed “the scum of the internet” – memes.

Episodes tackle current issues facing the digital community, such as IP, ownership and profit around digital content, through humor and entertainment. All creative department heads for “Starter Pack” were female, and real meme artists created authentic original memes for the show.