I knew Life Itself was going to be a serious movie, but the surprise was on me! It ended up being much more than that! Life Itself is probably the saddest, most heartbreaking movie I’ve seen all year. Now I know that may turn a few of you away, but even though this movie made me cry my eyes out, it also made me want to run out of the movie theatre and live my life to the fullest. It made me happy to be a part of this big grand world; when even though it doesn’t seem like it, everything you do in life matters. Every second of your life matters, and unbeknownst to us we are connected not only to our past, present and future we are also connected to others’.

Here’s how it goes, if you don’t like spoilers. STOP READING NOW.

The film is broken up into chapters, the first chapter is about a man in therapy who has been left seriously troubled after losing his wife. We don’t know how he’s lost her or why, it takes a bit for the audience to find out. First, we learn about their relationship, their life and how much he loved her. Then we find out that his pregnant wife was run over by a bus while crossing the street. He watches her die along with other pedestrians and those inside the bus. (this will matter later.) After he tells his therapist the full story, he blows his brains out in front of her.

The next chapter isn’t as long as the first but let’s us know that the couple’s baby survived. A little girl. However, this little girl’s life is tormented by death. Her mother died while she was inside her belly, then her grandmother died, then her dog dies. All she has left in the world is her grandfather, who raises her. However, she grows up somewhat troubled always feeling the loss of her parents. Her chapter ends with her crying on a public bench. 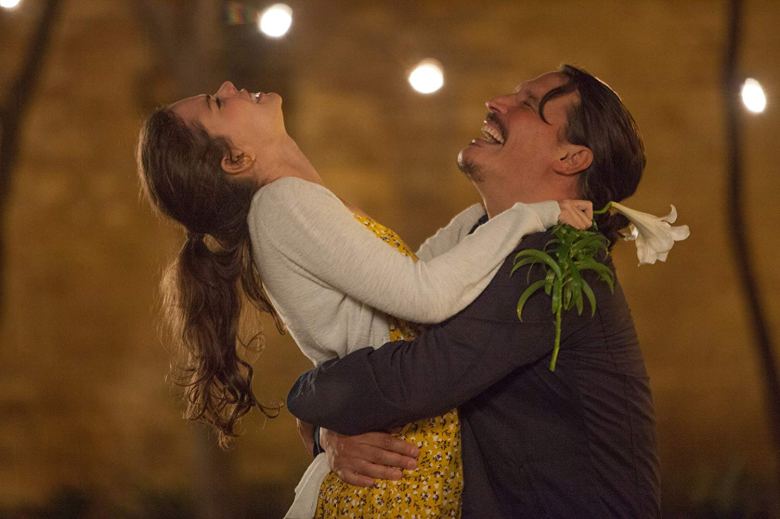 This next part almost seems like it’s a whole brand new movie. It takes place in Spain, in the countryside. First we learn about two men as they have an intense talk, nothing dramatic just two men setting boundaries. One is rich and owns the land while the other is a simple farm worker. Then we dive more into the simple farm worker’s life; we see his romance unfold with his wife. But the rich landowner gets more involved with his family. He tells the man’s son about a place called New York. He becomes infatuated with it so the farmworker saves his money and takes his wife and son to New York. But sadly, their family vacation is ruined when the child unintentionally distracts the bus driver who then hits a pregnant one and kills her. ( Which connects them to the first story.) After this incident, the child begins to suffer from trauma, this then tears their family apart. The dad becomes a drunk and moves away, leaving his wife and son with the rich man.

The next chapter focuses on the child who has now grown up and gone to college. His mom then dies of cancer, and his world is changed. It is then that these two stories reconnect once more.

The guy ends up finding the crying girl on the park bench and they fall in love and get married.

Fast forward, to present day and the story of all these past generations is being told through a book by the daughter of the two young kids.

Overall, the story tied together very beautifully but it was very heartbreaking to watch, especially the second portion of the film with the family in Spain. With the saddest part being when the little boy has his vacation horribly ruined.  Then when his mother is dying from cancer she gives him the most beautiful speech and I think that’s the moment when everyone begins crying in the theaters.

I very strongly recommend everyone to check out this film, it was beautifully written and each character is deeply developed in a short amount of time. It’s been a full 24 hours since I watched the movie and writing this and I am still thinking about it and replaying scenes over and over in my head. It will leave you impacted that’s for sure!

Amazon Studios will release Life Itself in theaters September 21, 2018