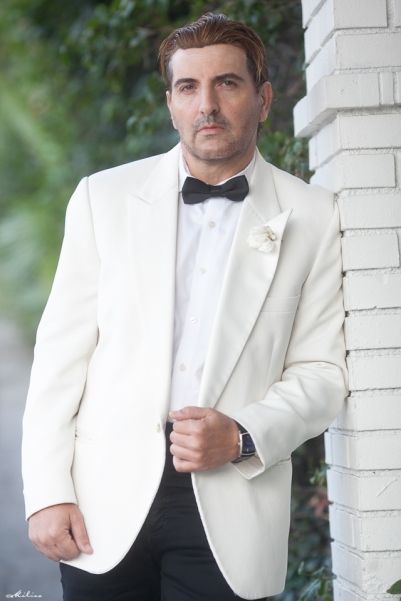 Rokki James, grew in Bonningheim, Germany and spent the first five years of his life there until his parents (originally from Greece) immigrated to the United States in 1975. They made their home Clearwater, Florida where Rokki embraces his athleticism participating in soccer, weightlifting and boxing. Fast forward to the age of 18, he made the move to the big city, New York. In Gramercy Park he roomed with two roommates on of which was a musician. Part of Rokki’s start in the Entertainment business was helping his roommates band ” The New York Dolls” by as unloading their equipment at popular Rock venues like CBJB’s in Hell’s Kitchen.  But living and working in the city that never sleeps came with a price.

“In those days these places were really dangerous, especially around Alphabet City. I had crazy drug addicts pull knives and guns on me several times in the parking lot from bar brawls which happened almost every weekend.” says Rokki James.

Rokki notes he never got into drugs and thanks his own addiction of being healthy, playing sports and weight lifting at the gym on a regular basis.

“This really helped me the most when I was in those bad situations in NY. ” says Rokki about his athletic lifestyle.

In his early twenties, Rokki then movied to Chicago where he began to train daily at Windy City Boxing.

“I was in great shape earning money as a model, promoting beach wear and suits at clubs. Popular new nightclubs would also pay us to just hang out there and mingle so they could attract a better crowd for their business. It was fun and I was making a lot of good friends and really good money.” 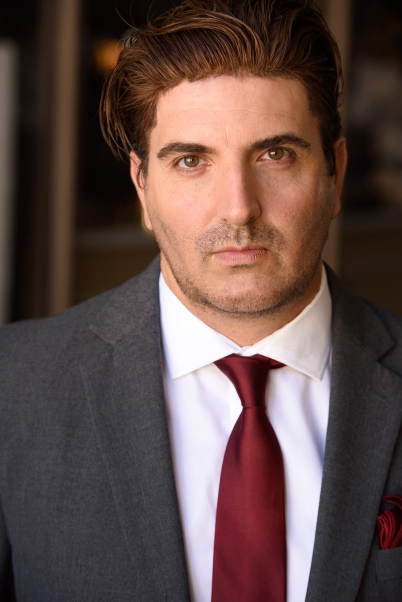 Even though Rokki had thrives in athletics one of the things he had dabbled since high school was acting, with his kicks coming from doing impersonations with his high school friends for fun.

“I’d impersonate relatives, friends, and some teachers to my friends for laughs. ” says Rokki.

But it wasn’t until 1997 when a friend of Rokki’s introduced him to a movie called Swingers, about actors in Los Angeles and what they go through with auditions and living in LA; that Rokki decided to pursue acting himself.

“That same day I got the acting bug. I had lots of money saved from modeling packed my suitcase and motorcycle in my big black pickup truck and drove cross-country to Los Angeles.”

Rokki got his first movie break when he landed the lead role in a feature film, “The Killing of a Japanese Bookie.”

“I reprised the role of a strip club owner who gets in a gambling debt with the mob and the only way to reduce the debt or get out of it would be to kill this Japanese Bookie. This was a 30-day film shoot, two weeks in Miami and two weeks in Tampa. ”

And thanks to this role, Rokki went from knowing hardly anyone in Miami, to building a large connections and lasting friendships.

Rokki has gone on to do dozens of projects including: Oklahoma Sun {2016}, Crackbaby Billionaire {2017} and most recently Mobb Diaries (2018}.  View his full list of credits here.

Portraying World Heavyweight boxer Tommy “The Duke” Morrison. This role was my biggest challenge. I was given about a year to change my body, hair style and accent. I went from 170 lbs. to 228 lbs. I had the honor of training at St. Pete Boxing Club with Keith “One Time” Thurman who is also the current World Welterweight Champ. As well as a couple of other world-class athletes in the Florida area such as China “The Dragon” Smith. Smith was casted for the roll of George Forman. I also memorized all of Tommy Morrison’s 1993 ESPN interviews word for word. I grew a real mullet and bleached my hair blond. The most entertaining thing I did was a take on various bartending and catering jobs at beach resorts and introduced myself as Tommy from Oklahoma to the other employees. I’d tell them I’m here in Tampa for boxing tournaments. No one knew I was an actor. All the employees were convinced I was this country boy boxer from Oklahoma. I stayed in character for a year. I had everyone calling me Tommy everyday even the customers. I basically lived Tommy’s 1992 biography in 2014. I would tell strangers stories about girlfriend problems. These weren’t my real problems these were the researched problems Tommy had in the 90s. I’d tell the same stories with a 2014 twist and it just really helped me transform into Tommy Morrison. I was living his 90s lifestyle every day. When it was time for the filmmakers to shoot the movie, I was already him I talked like I was from Oklahoma and looked like him, I even became very close friends with Tommy’s real-life best friend and promoter Tony Holden who runs the Buffalo Run casino in Miami, Oklahoma. We talked for hours over the phone and he told me so many stories. Those real-life events helped me progress in my transformation.

2. Do you see any of your roles as a mirror into your own life?

My job as an actor is to become someone else. The script is very important to me. I tear it apart and try to find out who this person is. Maybe it’s a mirror of people I met at some point in my life that I found very interesting. At times I’ll bring that into the characters. I have a natural toughness that comes easy for me because of my upbringing. Sometimes I mirror that part into my role. The biggest mirror is the director’s vision and what he feeds me, this way I can bring it to life the best way I possibly can for him with no conflict. Meaning if the director’s needs to see something more in the character I won’t challenge him, I’ll do my absolute best to bring it and make it happen the way he visions it.

“The Full Monty” was my very first musical theater experience. I’ve been in over a dozen plays with some or very limited singing. This was a full-blown musical and watching the other actors who have years of singing and dance experience really blew me away. I’ve never experienced anything like this before as an actor. I hired a singing coach from Juillard School of Music to coach me after I was cast. Also, I practiced every day on my own. Building vocals and learning to sing will open more doors for me on Broadway since I’m living back in New York now.

4. In the “Rocky Horror Picture Show” what character did you play? How did you prepare for this role? What did you enjoy most about the character? Did you grow as an Actor?

Rocky Horror auditions were going on at a small theater near my house called West Coast. It seats maybe 150 people. At the time of the Rocky Horror auditions, I was already cast in The Full Monty and had a very busy daily rehearsal schedule. The Rocky Horror shows scheduled for October. This was perfect for me because I would be wrapping The Full Monty in September. I could have Rocky Horror all lined up and ready to go for October. The only problem was I missed the Rocky Horror auditions by one day I was devastated especially when they happened just down the street from where I live. I really wanted to audition and I contacted the director and member of his team to see if they would allow me to audition, they said casting decisions were already made and I was invited to come see the show in October. Frustrated, I went online for more Rocky Horror auditions and found one almost 2 hours away in Lakeland near Orlando. This was a big audition there were lots of dancers there and they had a panel of judges like American Idol watching you dance. When my number was called to audition I got laughs from the casting crew because of my name. I was Rokki auditioning for Rocky. The best part a week later decisions were made and I got cast as Rocky. Little did I know but this was the biggest Rocky Horror production in the state of Florida if not the entire country. The Polk County theater seats 1,400 people it’s a historical monument that Elvis Presley performed at one time. Rocky Horror fans come from all over Florida every year to see this particular show that is put together by director Ferdinand Dejesus and Ultimate Dance Center. To prepare I learned the song Swords of Damocles and sung it every day, I also learned how to dance in five-inch heels and using a boa during the second act called The Floor Show. Rocky definitely challenged me and I grew as an actor on stage. At one point I would leave my Full Monty rehearsals and drive as fast as I can to Lakeland for my Rocky Horror rehearsals. This was a very physical show and demanded me to be in the best shape possible. So, on top of the dance classes I was at the gym everyday lifting weights. Best of all I knew no one really from Orlando or Lakeland and I bonded with the cast and crew which I know we’ll all be lifelong friends.

5.  Who is your favorite Shakespearean character to play? Why?

My favorite Shakespeare character is Hamlet, and I feel one day when I’m ready with lots of training behind me I will land this role.

6. What is your favorite Shakespearean quote?

My favorite Shakespearean quote came from Hamlet “To be or not to be that is the question” Think about those words.

7. What do the next 6-months look like for you?

I’m cast in three Shakespeare plays for 2019 Earl of Kent in “King Lear,” Thisbe in Midsummer Night’s Dream and Ancient Pistol in Henry IV. My biggest work so far with Shakespeare is rehearsing daily to perform King Leontes in Winter’s Tale for The Actor’s Studio in New York. I’m currently going through an audition process with The Actor’s Studio. I already performed Biff in Death of a Salesman and now Shakespeare’s Winter’s Tale is my next 5 minute audition on stage for the Studio. I’ve been rehearsing all summer with the coaching of my amazing Shakespearean teacher Dee O Brien and with her help 2019 is my year of Shakespeare.

8. What would people be surprised to know about you?

I don’t ever give up, I’m a fighter in every way possible and would take my shirt of my back if you’re a good friend of mine in trouble. This past year my dad was like a tornado with his health problems, and with me working on two musicals and a film running back to back with rehearsals I always made time to be by my dad’s side at the hospitals and help get him out of rehab into the house walking on his own again using a cane not a walker or wheelchair. Today my dad is doing better than he’s done in years and I’m proud of the time I put in most to help and be there for him because my dad will always be my biggest hero.