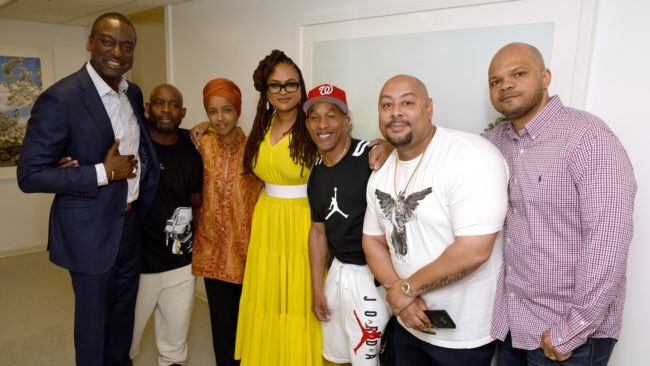 It has been reported to be the most watched program on the streaming giant since May 31st and the views just keep sparking backlash from the community against the real lives portrayed in the 4-part miniseries.  The story surrounds the 1989 case headlined “Central Park 5” where five male teenage students from Harlem were wrongfully convicted on rape charges and sentenced to years behind bars. The series, pioneered by Netflix’s 13 director Ava Duvernay, is a dramatized yet chilling portrayal of each boy’s point of view starting from the hours before the crime up until there release more than 10 years later.  It is a heartbreaking truth long known to the Black community especially those residing in inner cities like New York, Miami, Los Angeles, and Chicago.

This week the lead prosecutor and the woman responsible for convicting the innocent teens, Elizabeth Lederer, has resigned from her lecturer position at Columbia Law School.  This is not the first time however that the school has been petitioned to remove her. In 2012 a documentary titled, The Central Park Five, which focused on the arrests, interrogations, trials, convictions and vacating the convictions of the five men who were teenagers in 1989 at the time of the case was released which led to students, predominantly black students at the University to call for her removal.  They also petitioned for professors at the college to undergo mandatory anti-discriminatory training. Their requests were ignored. This is was in the earlier days of social media movements. The hashtag #CancelLindaFeinstein has been trending since May 31st.  The times have changed a bit but the underlying racism and the social stigma lasts forever. Feinstein, who became a so-called accomplished crime novelist, has been since dropped by her publishers and removed from multiple boards she was associated with. She continually states that her investigation from 1989 was accurate and that the film portrays falsehoods and exerations about how the teens were treated in police custody.

Emotions run deep and hot.  This story comes on the heels of the current Black Lives Matter movement.  It comes after the Civil Rights movements. We think of Americans like Emmet Till, Trayvon Martin, Eric Garner and Kalief Browder.  It angrily begs the question, why does the American criminal justice system attack and target members of the African-American and Latino communities without regard for human decency and sensibility? Are we that feared? Let’s take a deeper look into some of the reasons why White Americans in position would lie, cover up, and in some cases kill members of our community.  It is a harsh reality that we all must accept in order to move towards change.

Race is not an actual thing.  It is a social construct. There are no specific genetic markers that cluster all Black persons together or that cluster all White persons together.  There are no biological factors. Racial identity in fact can be fluid. When a White person marries a Black person, there is a shift in the understanding of their identity.  The only true race that exists is the human race. In our everyday reality however this is not true. The truth is that the pigmentation of one’s skin and hair changes the way they are viewed in society and the way that they view themselves.  Society controls the narrative that white skinned people are non-violent, innocent, and are standard members of their given community. Unlike, their darker skinned counterparts who are viewed as animal-like, wild, and detrimental. Who writes the script? Slavery has been outlawed for centuries but the temperments have not quite changed.  Blacks were once viewed by Whites as property, not as humans and surely not as equals. Would you trust a person who once owned you as their property to change their perception because a law changed? The fight to end racial inequality lies within the hands of those who created it. So while we might chant “We Shall Overcome” and “Black Lives Matter” we are not permitted to fight in this battle because the war against our race will not end until White Americans stop it.

The Media and Money

The narrative has been set.  Who promotes it? In the film there’s a scene in which current President Donald Trump calls for the death penalty against the five teens.  He went as far as to put out an ad in a public newspaper prior to their trial saying that they were guilty. He was at that time mainly known for his real estate business ventures.  So, a person who is rich enough can put money behind statements that get promoted around our country. Hmm. The media is very much responsible for what happened to the teens and what happens to innocent Black men, women, and children in different parts of this country.  You should always be careful with words because they are able to change minds and hearts. Censorship is something we need to advocate for. Why is it okay to print and promote storylines that create disparity? A white prosecutor is nor more important that an innocent person on trial just as much as a white cop isn’t an executor on the streets of inner cities.  But it happens all to often and the media propels it forward.

Systemic racism has accounted for a lot of protective based legislation in the past 100 years of our legal history.  Anti-discrimination laws, hate crime statutues, desegregation, and necesaary inclusion like Affirmative Action only proves that Black Americans are undoubtedly and shamelessly viewed as less than our White American counterparts.  We are stacked up against a system controlled by the latter that reminds us of where our chips fall among the free. Are we really freed if we have to fight every step of the way? We struggle to find housing, jobs, afford good healthcare and even struggle to get our votes registered in government elections.  The criminal justice system was designed to keep us from achieving fairness within our society.

It is the ugly truth America regrets to face and it is the reality of every Black person in this country.  Understandably, we have come a way but the truth remains that being Black in America creates disparity among all aspects of our culture.  We must continue to uplift our own communities and tell stories like the Central Park Five case so that the current generation and the future ones understand what needs to be rectified.  As MLK Jr once stated, “we must accept finite disappointment, but never lose infinite hope.”