Taylor Swift has just released a second video for the 5th track off her album Reputation, Delicate. The video was released only on Spotify. Although, many people had trouble viewing the video due to an error on Spotify’s behalf. Only a few fans were able to see the video right away while other Swifties awaited.

Many were only able to view screenshots, but some Swifties were able screen record and post for us non-lucky ones!

The majority of  Swifties including myself were only able to see it after about an hour of waiting! Basically, staying updated by refreshing out Twitter feed. #DelicateOnSpotify became the 2nd most trending hashtag on Twitter even.

In the vertically shot video, Taylor is seen in what seems to be the woods. She at one point is twirling around with her phone, selfie style and even though in some parts it looks like she’s holding the phone, the phone is being held by someone else. (Maybe, Joe Alwyn?) Taylor looks ever so peaceful, blissful and happy.

She has soft curls in her hair, she is wearing her necklace with the initial ‘J’ and she’s pretty much enjoying life. She plays with her hair, blows kisses and is just super happy.

The cool part about the way this video was shot is that it’s different from any other video she has done, the way she appears and moves goes with the theme, Delicate.  She does a lot of hand movements, even points at her necklace. We see the sky, the trees and the grass.

It’s pretty much the sweetest most personal video Taylor Swift has posted and she looks incredibly beautiful.

In my personal opinion, I think this is Taylor’s way of letting the fans in how genuinely happy and in love she is. 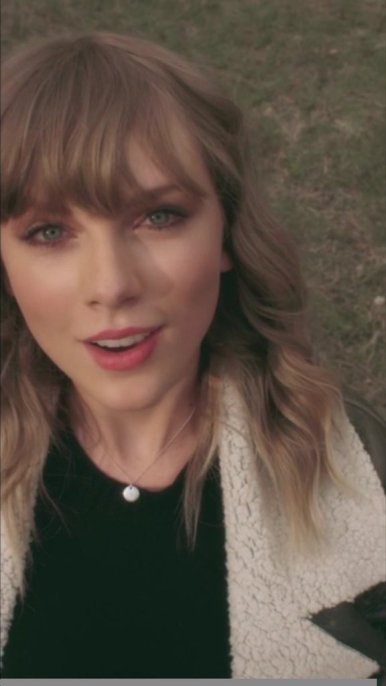 What did you think of this video? Let us know in the comments below!