New Japan Pro Wrestling returns this Sunday, April 1st with Sakura Genesis live on NJPWWORLD at 3AM EST. This card much like Strong Style Evolved features a marquee main event and multiple person tag-matches. Kazuchika Okada will be defending the IWGP title against Zack Sabre Jr. And it looks like Okada is looking to tie the record for most consecutive IWGP title defenses in one reign. 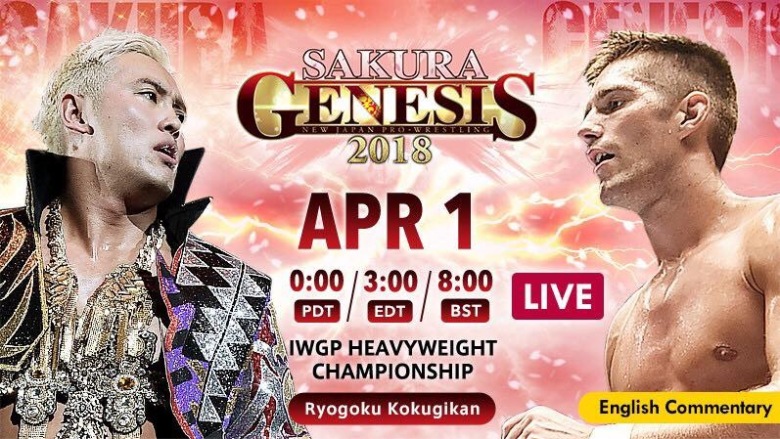 This match reminds of me of when the NWO was splitting into two factions, the Young Bucks will play the role of the NWO Wolfpac, Meanwhile Owens & Yujiro are Horace & Vincent. No idea why this match is happening. My guess is that they will give Owens the win with Matt still selling his bad back.

This match will be intriguing because we know that Yano and Taichi will be doing some comedy and Ishii will be laying a couple of forearms to Taichi.

I almost feel Gedo forgot who the champions were and there haven’t been any title changes in a month so I expect new champions to be crowned in this match. They should probabaly also get rid of these belts.

Any match that features Hirooki Goto and Tanahashi on opposite of sides of each other, I’m sold. This match should further the feuds between Goto & Juice for the NEVER Championship and Finlay & White for IWGP U.S Championship. Considering all the guys in this match, this one should be really fun to watch.

This match is EVIL’s return from an orbital bone injury. Therefore, I am curious to see how he does and I am looking forward to the Tag-Title feud between EVIL& SANADA and the Killer Elite Squad. Any match with Naito & Suzuki is guaranteed to have tons of heat. This should also set up Naito challenging Suzuki for his IC Championship in the near future.

For close to a decade this division has always been about one dominant team and various challengers. So, the question is, now that the Young Bucks have moved up to the Heavyweight Division, who will become that dominant team?

Although, the champions are a technically sound team in-ring, they lack charisma. Then we have Hiromu Takahashi & BUSHI, however it doesn’t seem like they are going to be a long-term team. So, that leaves Roppongi 3K to become the dominant team of the division. They have all the tools needed and now they just need a match to get them over the hump.

Marty Scurll finally gets his rematch for the title he lost at Wrestlekingdom 12.  This isn’t the first time these guys have matched up before having wrestled all over the United Kingdom, the United States and now Japan. These guys always bring it when they face each other and we should expect no different from this match. The one thing Ospreay and Scurll have brought to the Jr. division in NJPW is excitement!

This match will serve as a preview for two big singles matches that will happen at ROH Super Card of Honor during Wrestlemania weekend, Kenny Omega vs.Cody and Kota Ibushi vs Hangman Page.

I wasn’t shocked when Zack Sabre Jr won the New Japan Cup to secure this title opportunity. However, I was shocked at how he won the New Japan Cup by submitting Naito, Ibushi, SANADA, and Tanahashi. Talk about being put on the map in one tournament which is exactly what happened with ZSJ. His reward now is an opportunity to be the 11th successful defense in Okada’s historic reign. I don’t expect Sabre Jr. to submit Okada considering Okada is on the verge of tying Hiroshi Tanahashi for most successful title defenses in one reign (11) and two defenses away from breaking the record. I’m more interested to see the dynamics of the crowd, if they believe that ZSJ has a chance of submitting Okada and ending the historic reign before he is able to tie Tanahashi.

What do you think about is going to happen tomorrow on Sakura Genesis? Let us know in the comments below!