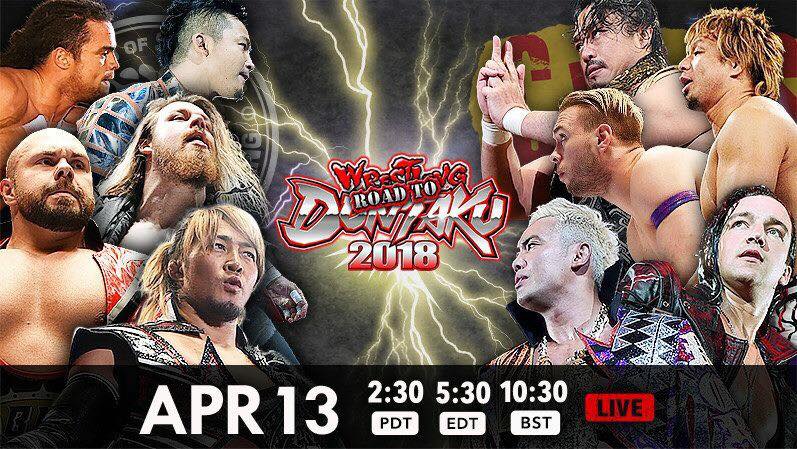 The first stop in the Wrestling Dontaku tour was at Korakuen Hall. This is the equivalent of going to a house show. You’re not going to get marquee singles matches but tag matches that feature the key people in the upcoming Wrestling Dontaku shows. These shows also feature Young Lions facing each other and facing veterans in the twilight of their careers. These shows are hit or miss in terms of quality but they’re easy to watch and are usually under three hours.

A battle of Young Lions in the opening match. Given the experience level of these guys it was decent. Both guys throw pretty good-looking dropkicks. Yagi defeated Uemura via tap out with a Boston crab.

Oka is one of the most experience Young Lions they have. Typical veteran versus Young Lion match, New Japan likes to put on these shows. I would normally say it was bad but given who’s in there it was fine. Oka had to work a little harder just cause at this point Nakanishi is like a statue. The crowd pop huge for Oka hitting a vertical suplex on Nakanishi. Nakanishi won via torture rack.

A very enjoyable match, a lot better than the first two matches. Everyone did their part well. Makabe and Nagata going at it was lots of fun. Umino is easily the most polished Young Lion they have, Narita is far behind. As Makabe was running wild Narita begged for a tag and Tiger Mask IV took advantage of his inexperience by hitting a few stiff kicks and Tiger Driver for the pin.

Post match it looked like Umino challenged Nagata to a one on one match. That should be fun when it happens.

Suzuki-Gun jumps Roppongi 3k & Rocky before the bell rang to gain an advantage. Typical bad crowd brawling we see in every Lizuka match. Taichi being his usual lazy self. Not much of a match. Roppongi 3K have really fizzled out since their exciting debuts. They need something to get them going again and matches with Taichi isn’t it. Lizuka hit Sho with a chair that enabled Taichi to hit a last ride powerbomb for the pin. This match sucked.

Ishii came out wearing his newly won RPW British Heavyweight Championship. Tenzan isn’t a statue yet, but he moves in slow motion. Yano did comedy early on but Tenzan put a stop to it. Fun exchange between Henare and Ishii that makes you want to see a singles match between the two. Henare showed a lot of fire when he was in there. Crowd popped for all of Tenzan’s Mongolian chops which at this point it’s all he can do. The end came when Ishii was able to take advantage of Henare’s inexperience and hit a brainbuster for the pin. Overall okay match when Tenzan was not in. Henare looked great in defeat.

Cody took credit for this on Twitter. What a heel. Somewhere in hell we will get a Bone Soldier Vs Taichi feud.

This match combines the feuds for the Jr. Tag Title and Tag Titles. Suzuki-Gun again jumped their opponents before the bell. Lance Archer tried to make a little girl cry, he failed. He then tried to do the same with a toddler and failed again. Gimmick destroyed. Lots of brawling in this one not much for tags in this one. Much of the heat was on SANADA he made the hot tag to Hiromu who then ran wild. The juniors were a lot more impressive in this match than their heavyweight counterparts. For whatever reason KES doesn’t mesh well with SANADA and EVIL. Finish was BUSHI getting a small package on Kanemaru. Post match their was a beat down of BUSHI by El Desperado and Kanemaru. Pretty decent match but nothing blow away.

You can be eliminated by pin, submission, DQ, and being thrown over the top rope like a battle royal. Okada and Tanahashi briefly went at and the magic is still there. The brief exchange between Tanahashi and Ospreay makes me want to see a singles match between the two. Kushida and Ospreay eliminate each other after Ospreay hits a suplex on the apron and both fall to the ground. Michael Elgin eliminates YOSHI-HASHI by throwing him over the top rope. Hirooki Goto eliminates Elgin by hitting a spinning heel kick as Elgin was on the apron. Juice eliminates Goto by clotheslining him off of the apron. Right away Okada eliminates Juice by tossing him over the top rope. Tanahashi and Okada are battling on the apron which enabled Jay White and David Finlay to eliminate them respectably. It’s down to David Finlay and Jay White in this match. These two have great chemistry together and their US Title match should be great. Jay White tried to German suplex Finlay off of the apron to the floor but failed. David Finlay clotheslined Jay White over the top rope to the sole survivor of his team. Long match and at times was good, it never became great but it was never boring. This also gave David Finlay a big win before challenging Jay White for the US Title.

Overall the show was easy to watch nothing to go out if your way to see but storylines and rivalries were furthered for the big shows on this tour.