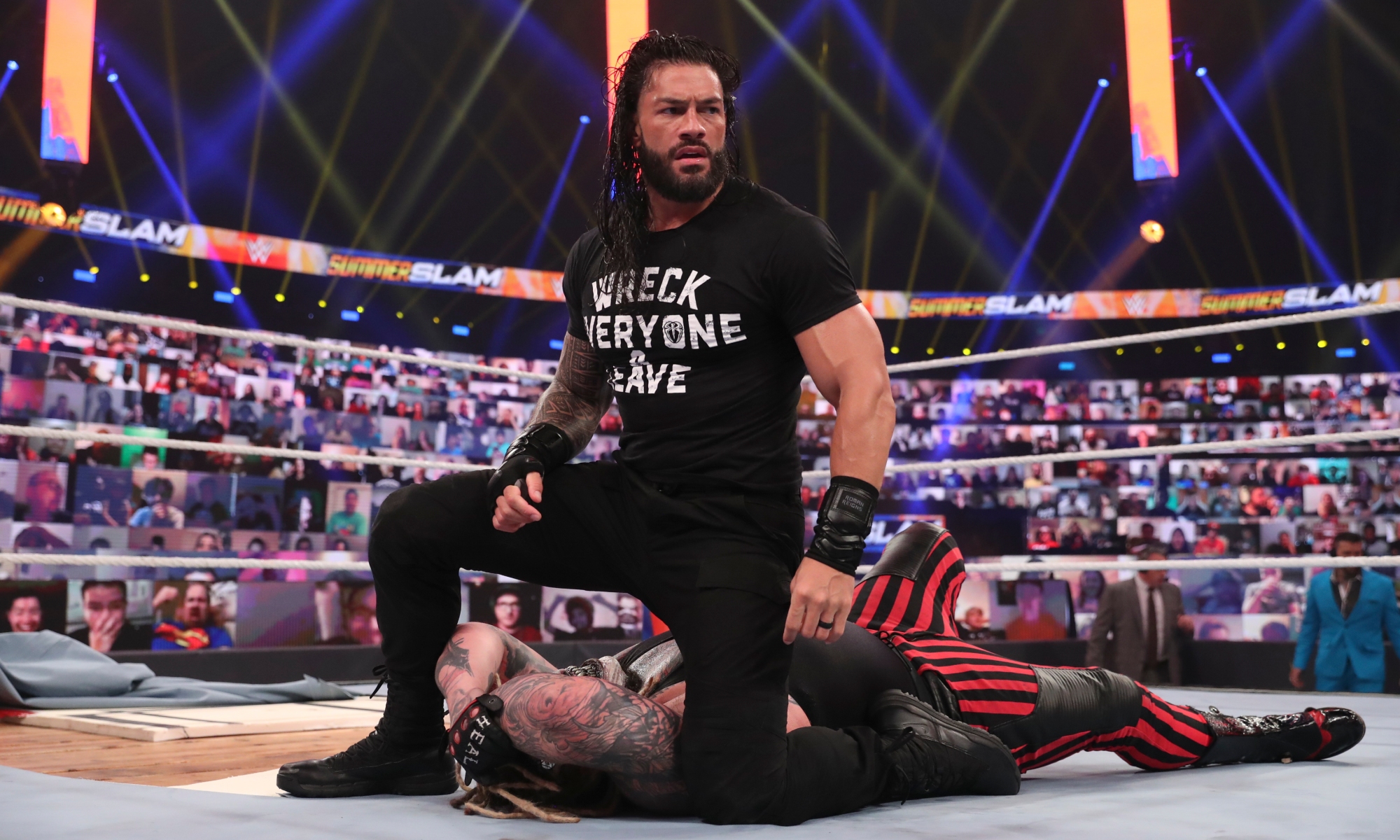 WWE Summerslam took place at the Amway Center in Orlando, and it was their first pay-per-view this year to  feature the WWE Thunderdome, which included hundreds of fans streaming live onto LED video boards, pyrotechnics, drones and more.

Summerslam had a lot of big moments and included one the best endings to a WWE pay-per-view in quite some time.

Here were the best moments of the night.

The MOST unexpected moment was the during closing of the show, it was when  Braun Strowman was defending his Universal Championship against  “The Fiend” Bray Wyatt in a Falls Count Anywhere match — The Fiend took the win to become the new Universal Champion but his celebration ended abruptly when none other than Roman Reigns came out and attacked both him and Braun Strowman. This was a very cool moments since we haven’t see Roman at all since  he decided to take a break from the company due to Covid-19 concerns. Roman Reigns came back with a new attitude, and it’s safe to say the WWE universe is stoked to see what he will do next.

Another highlight of the show included the in-ring debut of Rey Mysterio’s son Dominick, he faced ‘The Monday Night Messiah’, Seth Rollins  in a Street Fight. This was a strong story driven match that included Dominick’s mom, Angie, watching his match out of concern for her son; Rey Mysterio getting handcuffed to the ring and sadly Dominick losing his first match. But nevertheless we saw enough of Dominick to know that he has potential— and now the question is, when will Rey Mysterio get his revenge against The Messiah?

However, the match I personally think stole the show was none other than Drew McIntyre vs Randy Orton for the WWE Championship, both men put on a phenomenal performance and really brought a main event caliber match to the show. This was not your typical WWE match with tons of finishers or near falls, in fact neither Randy or Drew hit their finishers in this match. It was a straight wrestling match that was straight fire and saw Drew McIntyre retain his championship.

No one likes goodbye, but sadly we had to say goodbye to one of the best women on the mic in recent times, Sonya Deville. Sonya Deville lost in her match against Mandy Rose, where the loser must leave WWE. Both women went out there and gave it there all. And it turned out to be a very entertaining match. However, we will not be seeing Sonya Deville for a while, it seems she might be taking some time off especially after experiencing a terrifying moment where a man tried to kidnap her from her home.

And speaking of Goodbyes, the WWE Universe also had to say goodbye to Renee Young, the news that Renee would be leaving the company broke just a few days prior — and this was her last day. We wish Renee well and know she will kill it in whatever she decides to do next.

And one of the other notable tidbits to come out of Summerslam is that Keith Lee, former NXT North American Champion and former NXT Champion will be making his Monday Night Raw debut.